Posted by SRSrocco in Economy, News, Precious Metals on April 11, 2017

The current silver price trend is once again at a critical juncture.  It has been four years since the price of silver crossed an important trend line.  However, the present setup will result in either another correction lower, or a much higher price.

This is a ten-year chart which shows the current trading setup for silver:

Currently, the silver price is hitting up against the 200 month moving average blue resistance line.  If the silver price breaks above and closes above it, we could see a much higher silver price.  However, if does not, then we could experience another short-term correction.

That being said, I have become less concerned about the SHORT-TERM silver price movement.  While some investors are able to trade and make money trading silver, I am not one of them.  My focus on silver is to hold onto it for the LONGER-TERM.  Short term silver price movements are not a concern when we focus on the disintegrating energy and economic fundamentals.

Some precious metals investors have become frustrated or complacent due to the low silver price.  This is understandable because some may have purchased silver at a higher price and feel as if they made the wrong investment decision.  However, acquiring physical silver should be done over a period of time and be held as a SAFE HAVEN for the future…. just like any other retirement plan.

The BIG difference between owning physical silver and most paper retirement plans, is that the value of most retirement assets will likely plunge in value in the future while the price of silver will likely be much higher.  Unfortunately, most investors are either too impatient, fickle or lack the ability to understand this LONG-TERM fundamental setup.

Lastly, if Americans who are mainly invested in STOCKS, BONDS and REAL ESTATE, diversified into a small 2-5% allocation of physical gold and silver, it would totally overwhelm the market…. forget about the rest of the 7 billion people in the world.

Which is precisely why the MANIPULATION of gold and silver has been done mainly through psychology, rather than price.  Why?  Because the current algorithm pricing mechanism for gold and silver is based on their cost of production.  So, to see a current $18 silver price and $1,275 is not that ridiculous if it is based upon what it cost to produce them.

When the markets finally crack…. the Fed and Central Banks may have one last RABBIT to pull out of the hat, and that would be a HYPERINFLATIONARY event.  Unfortunately, this will not last long and will end quite badly.

Thus, when we reach this point… there is NO GOING BACK.  The United States and world will look like a much different place and at that point, it will be too late to sell paper and buy gold and silver.

The gold price in a range of currencies since Dec. 1978 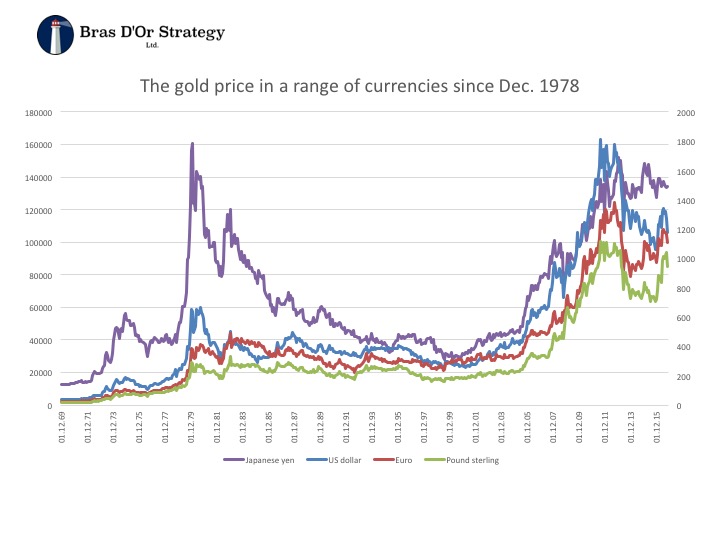